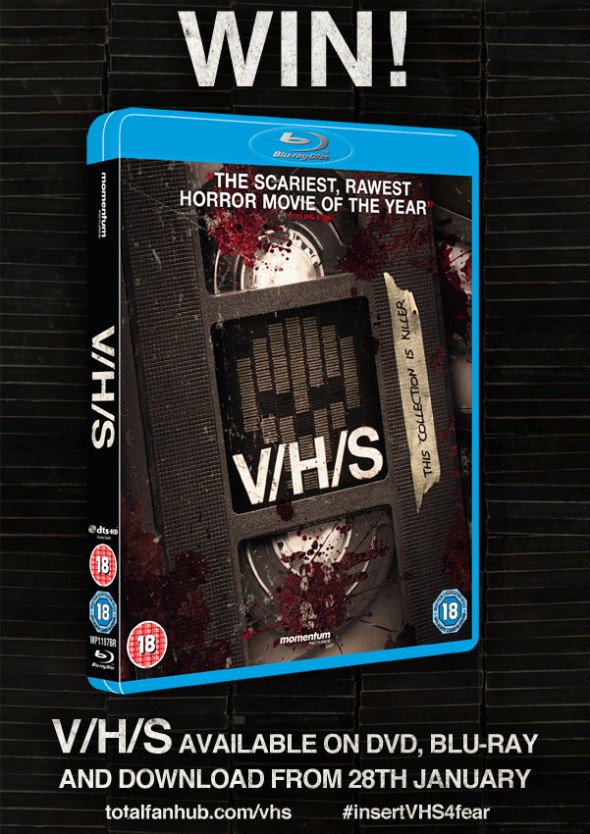 “The scariest, rawest horror movie of the year” (Rolling Stone) is shortly upon us; the highly original, brutally uncompromising, creative and diverse ‘V/H/S’ – out on DVD & Blu-ray January 28th (out in select UK cinemas January 18th) through Momentum Pictures.

The subject of huge critical acclaim following screenings at various international film festivals including Sundance, SXSW, Edinburgh, Toronto After Dark and London’s Film4 Frightfest, ‘V/H/S’ has been the source of a tremendous buzz amongst the horror fraternity and for very good reason. Highly original, brutally uncompromising, creative, diverse and, most important of all, genuinely creepy and enormously entertaining, this is one of the best horror films we’ve seen in a long time. ‘V/H/S’ sees the classic anthology horror movie given a contemporary and brilliantly visceral spin by some of the hottest directors working in the the genre today – Adam Wingard (You’re Next; A Horrible Way To Die), David Bruckner (The Signal), Glenn McQuaid (I Sell The Dead), Joe Swanberg (Hannah Takes The Stairs) and Ti West (The Innkeepers; Cabin Fever 2: Spring Break; The House Of The Devil).

To celebrate the release of V/H/S, we’re giving away a copy on Blu-ray!

If you don’t manage to win, you can buy V/H/S on Amazon here.

This entry was posted on January 23, 2013 by Amonymous. It was filed under Competitions and was tagged with Blu-Ray, Competition, V/H/S.