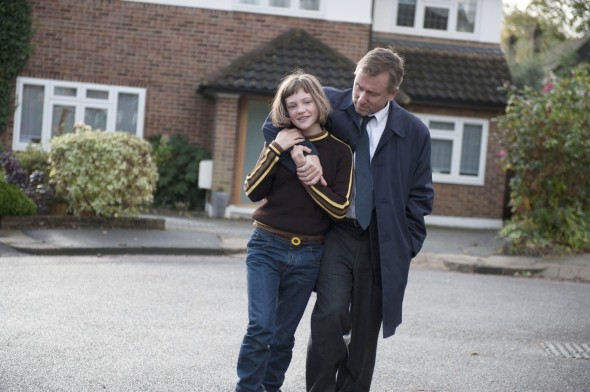 Winner of the Best Film award at last year’s British Independent Film Awards (BIFAs), theatre director Rufus Norris’ debut feature Broken (2013) finally gets its UK release this week, courtesy of StudioCanal. An adaptation of Daniel Clay’s novel of the same name, Broken is jam-packed with ideas, almost all of which are well-executed. The narrative centres around 11-year-old tomboy Skunk (magnificent newcomer Eloise Laurence), a type 1 diabetic who lives in a suburban cul-de-sac with her older brother Jed (Bill Milner) and single father Archie (Tim Roth). Through Skunk’s eyes, we see the troubled lives of those around her unfold.

When she is witness to Bob Oswald’s (Rory Kinnear) brutal attack on her slow-witted neighbour Rick (Robert Emms) after Bob’s daughter falsely accuses her friend of rape, it sets into motion a chain of events that ultimately has dire consequences. Broken busies itself with many interesting ideas and sub-plots, and Norris does a fantastic job of developing each strand without staunching the film’s momentum. Archie’s growing feelings for live-in nanny Kasia (Zana Marjonovic), for example, are as welcome to watch as Skunk’s foray into secondary school life.

There’s a touch of melodrama in the film’s climactic events as it hurriedly tries to complete its characters’ journeys, and with only a 90-minute runtime this could have been avoided. Crucially, Norris manages to find an excellent balance between drama and good-mannered humour. Be it elder Oswald going on a rampage, or his daughter’s promiscuity catching up to her in the worst possible way, there are many disturbing moments throughout Broken. It’s hard not to smile though when we get a humorous montage of Skunk haranguing Archie for a new phone, or when she starts seeing local boy Dillon (George Sargeant), whose idea of flirting consists of blunt dialogue (Are you a lesbian then?”).

Norris is aided by a strong ensemble cast who all play their parts to perfection. Interestingly, all the parents want what’s best for their children, but differ in the way they choose to go about it. Roth is likeable as the soft-spoken and protective Archie, whilst Kinnear is committed in his role as the unhinged father of three troublesome daughters. However, the standout performance in Broken is undoubtedly provided by the excellent young Laurence in the lead role.

Skunk is a complex character; perceptive and direct, her childlike innocence is stripped away as the film progresses, and Laurence portrays it all with a natural flair that bodes well for the future, assuming she continues developing her talent. Filled with devastating drama, but also capable of many endearing moments, Norris’ Broken is an affecting British indie which gets the most out of its story thanks to the talented ensemble and an excellent lead performance.

This film review was originally published at Cine-Vue.