After gaining a lot of buzz at this year’s Sundance and Cannes film festivals, Neo-Western Ain’t Them Bodies Saints – the assured second feature from prolific film editor David Lowery – finally gets its UK release. Although working with familiar archetypes, excellent performances combined with some sumptuous visuals help distinguish this from similar fare.

Set against the backdrop of 1970’s Texas, Lowery’s latest begins where most Westerns end, with the outlaws – in this case impassioned couple Bob Muldoon (Casey Affleck) and his pregnant girlfriend Ruth Guthrie (Rooney Mara) – getting apprehended by lawmen after a shootout. In said duel, Ruth wounds Officer Patrick (Ben Foster) but Bob dutifully takes the blame. Four years later, Bob escapes from prison (at the sixth time of asking), and leisurely sets out to reunite with his former flame and their daughter Sylvie, who was born during his confinement. However, while Bob has been locked up, Foster’s soft spoken cop has begun a tenuous romance with Ruth.

Ain’t Them Bodies Saints was originally envisioned as an action movie, but transitioned into a drama once Lowery began to put the pieces together. The result is a film which concerns itself more with the conflicted feelings of its protagonists, and while that at times makes for compelling viewing, the thin plot is slow-moving to the point of near-stagnation. A narrative that slowly builds to an emotional confrontation is seemingly what Lowery was aiming for, but the filmmaker’s storytelling decisions mean that the various subplots hold little collective power. Indeed, this ends up feeling a lot longer than the taut 105 minutes it actually is, with the introduction of three bounty hunters failing to add the necessary fire to the proceedings. 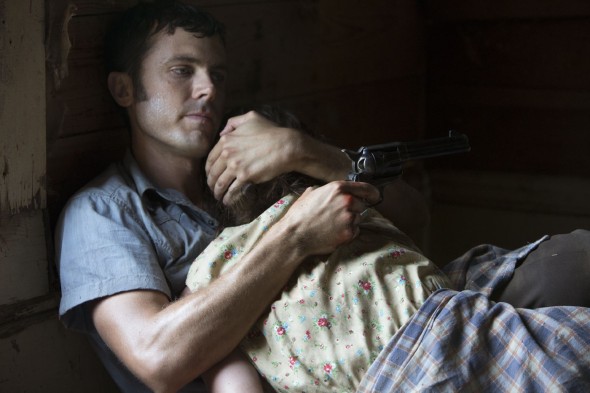 Although Ain’t Them Bodies Saints may be lacking in narrative energy, it’s not wanting for style, and Lowery wears his influences – Terrence Malick undoubtedly among them – on his sleeve. Bradford Young’s rural cinematography is beautifully realised, and his keen eye is perfectly complemented by Daniel Hart’s wonderfully utilised rhythmic score. There are a handful of excellent leading performances, with Mara, Affleck, and Foster delivering a masterclass in subtle, nuanced acting. Additionally, Nate Parker convinces as Sweetie, an old friend of Bob’s who helps hide the fugitive from the authorities as he attempts to make his way back to Ruth, and Keith Carradine produces a veteran turn as Skerritt.

For fans of slow-burning cinema, Ain’t Them Bodies Saints will prove an especially rewarding experience, with the talent both behind and in front of the camera hitting their marks. With some narrative tweaks, however, this picture could – and should –  have been a far more absorbing experience for the viewer.

This review was originally published at Hey U Guys.