“That awkward moment”, we’re told at the onset, refers to the point wherein the woman in a relationship asks the tentative question “So…where is this going?” That Gormican’s film has this shallow beginning is not a problem per se, but the manner in which its characters ‘develop’ is poorly plotted. Aside from the fact that it’s predictable – you can guess whether or not our three protagonists tell each other that they’re not adhering to their mutual pact – Efron’s Jason becomes less and less likable. 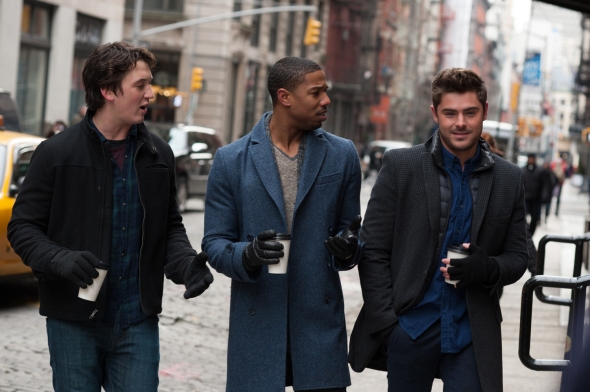 Though it’s never laugh-out-loud funny, there are at least a couple sequences which are titter-worthy – the most memorable of which is when Efron’s Jason turns up to a party inappropriately clothed. Additionally, Josh Pais makes good use of his scarce screen time as an awkward workplace colleague. And yet, Gormican is overly reliant on lazy and crass gags, from the usual penis jests to a running bathroom gag which quickly grates. When the biggest laugh of the film comes in the credits, there’s clearly a problem.

That That Awkward Moment is tolerable at all is down to the easy to watch cast. There’s some fun chemistry between Efron and Poots, but whilst the attraction between the two is easily believable, the course the relationship runs is anything but. It’s a similar deal with Teller and Davis’ characters, and by the time the credits roll we’re left thinking that both women could, and should, do much better. Even more disappointing is the grossly underwritten plotline that is Mikey attempting to fix his marriage, which fails to muster much emotional impact in spite of Jordan’s likeable turn.

Neither particularly insightful or very funny, even with solid performances from its cast That Awkward Moment feels like a wasted opportunity. That the screenplay is so mired in cliché is doubly frustrating when you consider how talented the cast are, and how they’ve all recently starred in superior movies. Why not watch one of those instead.

This entry was posted on January 30, 2014 by Amonymous. It was filed under Film Reviews and was tagged with Imogen Poots, Mackenzie Davis, Michael B. Jordan, Miles Teller, That Awkward Moment, Tom Gormican, Zac Efron.