Set in a futuristic LA our guide on this journey is Theodore Twombly (Joaquin Phoenix), whose job it is to create personal letters for people he’ll never meet at beautifulhandwrittenletters.com. Feeling increasingly lonely and depressed after breaking up with his wife Catherine (Rooney Mara), Theodore purchases an OS 1, a powerful new computer operating system (voiced by Scarlett Johansson). Dubbing itself Samantha, there is an instant connection between Theodore and his new acquaintance, and they gradually begin to fall for one another.

The world Jonze has imagined here feels like a logical extrapolation from where we are today. From the voguish fashion (high-waisted trousers, anyone?) to the way in which video games are played, these futuristic flourishes are fun to observe, and from the outset we are easily sucked in to Jonze’s tech-savvy sandbox. 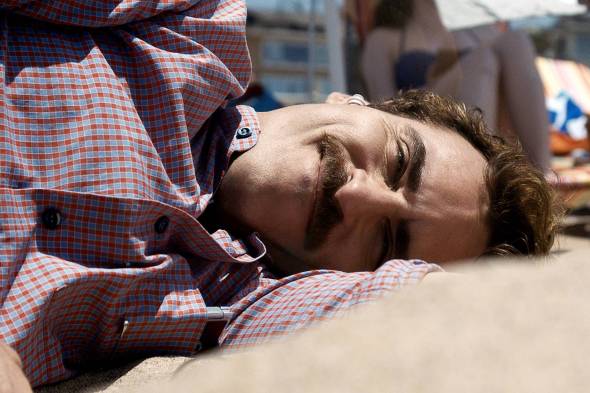 The script – deservedly Oscar-nominated for Best Original Screenplay – does a magnificent job of delving into the interesting issues that come with the burgeoning romance between Theodore and his OS. How do you have sex? Can it interact with your friends? How do you define a real relationship? This is a film where the questions are far more interesting than the answers, and in almost every scene there is a food for thought.

That it feels so real and authentic is down to the exceptional acting. Phoenix’s perfectly pitched portrayal of the sweet but vulnerable Theodore is one of great nuance, and though he is the lone actor on screen for much of the film’s run time, our attention never wavers. Perhaps even more impressive is Johansson; still extremely alluring despite her lack of physical presence, her charming voice work as Samantha discovers more about herself and the wider world helps make the central relationship an easy sell. The supporting cast is populated with well-known actors, all of whom make their presence felt no matter how small their moments. Olivia Wilde is especially efficient in a heart-breaking few minutes on screen, whilst Amy Adams gets to deliver some of the film’s best dialogue as Theodore’s sympathetic friend.

A film you can revisit time and time again and find something new to ponder, Her takes an unusual premise and uses it to draw some knowing insights about human connections. By turns funny and sweet, but always smart and thought-provoking, Jonze’s latest is a triumph.

This entry was posted on February 19, 2014 by Amonymous. It was filed under Film Reviews and was tagged with Amy Adams, Her, Joaquin Phoenix, Olivia Wilde, Rooney Mara, Scarlett Johansson, Spike Jonze.