It’s an ambitious script from first-time screenwriter Jack Paglen, one which attempts to combine a powerful love story with an examination of technological advancement and its dangers. Unfortunately, it’s only semi-successful. While the core concepts of Transcendence and the questions they pose are inherently interesting, the manner in which the themes are explored feels extremely superficial. Rather than grapple with the thought that Will’s ‘transcendence’ has world-altering benefits, it’s quickly decided that the pioneering scientist’s newfound powers can only possibly yield a catastrophic outcome for humanity. 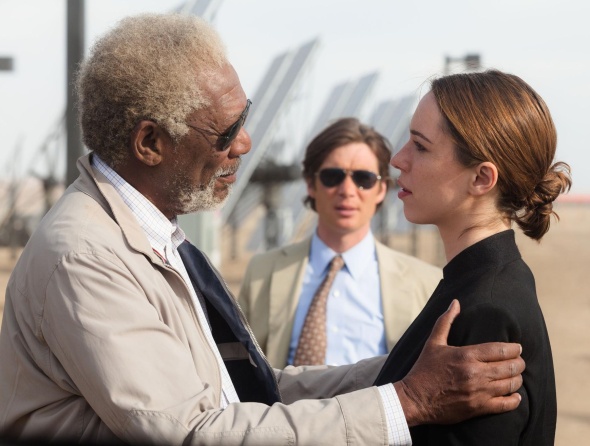 Coupled with the fact that the film begins with a flash forward before jumping back to how it all began, it robs the film of any suspense. Indeed, once Will is a computer there is very little by way of dramatic momentum, and by the time the energetic third act comes along it’s too little, too late. Worse than that, there are a number of plot holes which make Pfister’s Transcendence easy to pull apart. If you’re going to have a two year time jump, you need to make sure you have all your bases covered. In this regard, the lack of a media presence or seemingly any government hierarchy is suspect. The world of the film – beautifully shot though it may be – feels small for issues which have globe-spanning ramifications.

An outside view of Will and Evelyn’s off-the-grid experiment comes from stock characters inhabited by Kate Mara and fellow Nolan alumni Morgan Freeman and Cillian Murphy. It all amounts to a lot of wasted talent, with character development in short supply. As for Depp, his past charm and eccentricity nowhere to be found, and the difference between his human and digital personae is minuscule. The standout performers are easily Hall and Bettany; the former handles the emotional drama convincingly throughout, whilst Bettany’s Max is by far the most well-rounded character of the piece.

That’s not a high bar to clear, however, and can’t save Transcendence from being a dull and uninvolving affair.

This entry was posted on April 28, 2014 by Amonymous. It was filed under Film Reviews and was tagged with Cillian Murphy, Johnny Depp, Kate Mara, Morgan Freeman, Paul Bettany, Rebecca Hall, Transcendence, Wally Pfister.