To celebrate the release of FAST & FURIOUS 7 in IMAX, my friends at IMAX have kindly given me three pairs of tickets to see the film at your nearest IMAX cinema.

END_OF_DOCUMENT_TOKEN_TO_BE_REPLACED

To celebrate the home entertainment release of Obvious Child, I’m giving three lucky readers a chance to win a copy on DVD.

END_OF_DOCUMENT_TOKEN_TO_BE_REPLACED

Competition | Win ‘A Walk Among the Tombstones’ on Blu-Ray

To celebrate the home entertainment release of A Walk Among the Tombstones on January 19th, I’m giving three lucky readers a chance to win a copy on Blu-ray.

END_OF_DOCUMENT_TOKEN_TO_BE_REPLACED

Academy Award® winner DENZEL WASHINGTON (Safe House, Flight) and MARK WAHLBERG (Contraband, Ted) lead an all-star cast in 2 Guns, an explosive action film that tracks two operatives from competing bureaus who are forced on the run together.  But there is a big problem with their unexpected partnership: Neither knows that the other is an undercover federal agent.

For 12 months, DEA agent Robert “Bobby” Trench (Washington) and U.S. naval intelligence officer Michael “Stig” Stigman (Wahlberg) have been reluctantly attached at the hip.  Working undercover as members of a narcotics syndicate, each man distrusts his partner as much as the criminals they have both been tasked to take down.

When their attempt to infiltrate a Mexican drug cartel and recover millions goes haywire, Bobby and Stig are suddenly disavowed by their respective superiors.  Now that everyone wants them in jail or in the ground, the only person they can count on is the other.  Unfortunately for their pursuers, when good guys spend years pretending to be bad, they pick up a few tricks along the way.

To celebrate the release of 2 Guns, we’re giving away a goody bag! The prize will include a baseball cap, T-shirt, Key Finder and Car phone charger.

END_OF_DOCUMENT_TOKEN_TO_BE_REPLACED

“The scariest, rawest horror movie of the year” (Rolling Stone) is shortly upon us; the highly original, brutally uncompromising, creative and diverse ‘V/H/S’ – out on DVD & Blu-ray January 28th (out in select UK cinemas January 18th) through Momentum Pictures.

The subject of huge critical acclaim following screenings at various international film festivals including Sundance, SXSW, Edinburgh, Toronto After Dark and London’s Film4 Frightfest, ‘V/H/S’ has been the source of a tremendous buzz amongst the horror fraternity and for very good reason. Highly original, brutally uncompromising, creative, diverse and, most important of all, genuinely creepy and enormously entertaining, this is one of the best horror films we’ve seen in a long time. ‘V/H/S’ sees the classic anthology horror movie given a contemporary and brilliantly visceral spin by some of the hottest directors working in the the genre today – Adam Wingard (You’re Next; A Horrible Way To Die), David Bruckner (The Signal), Glenn McQuaid (I Sell The Dead), Joe Swanberg (Hannah Takes The Stairs) and Ti West (The Innkeepers; Cabin Fever 2: Spring Break; The House Of The Devil).

To celebrate the release of V/H/S, we’re giving away a copy on Blu-ray!

If you don’t manage to win, you can buy V/H/S on Amazon here.

Competition | Win an ‘I am Bruce Lee’ Poster, T-Shirt and DVD 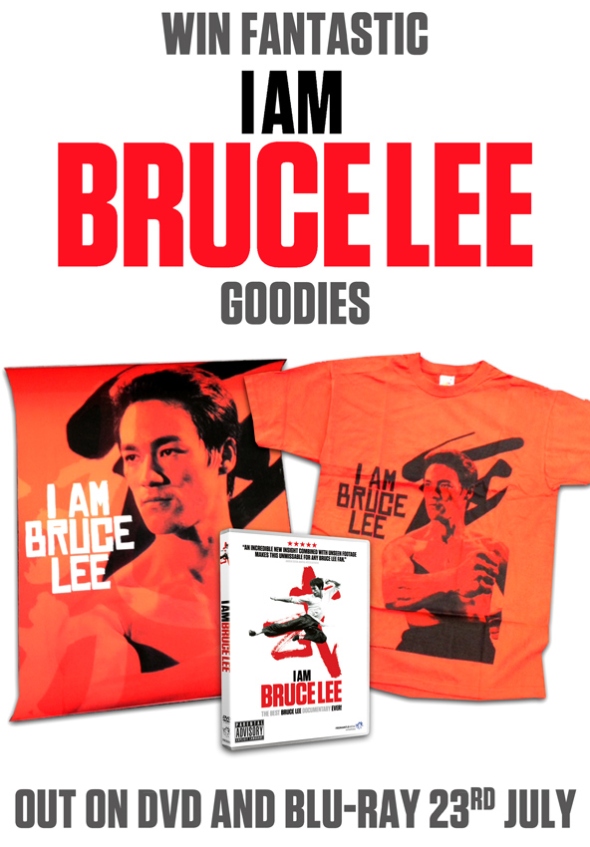 Witness one of the most well-known and respected martial arts legends in all his glory, this July, in the visually thrilling documentary I am Bruce Lee (Fremantle Media). Featuring a host of rare footage and photographs, this compelling documentary examines the fascinating life, continuing influence and lasting legacy of one of the most iconic actors and martial artists of all time. To celebrate the theatrical release of I am Bruce Lee (Fremantle Media) at selected UK cinemas on 20th July and release on DVD and Blu-Ray on 23rd July, we have a host of goodies to give away!

One lucky winner will receive a poster, t-shirt and I Am Bruce Lee on DVD, and the runner-up will get a T-Shirt and the DVD!