The best sports films are often those where enjoyment is not entirely dependent on a love of the game in question, and Brian Helgeland’s 42 (2013) fits that criteria perfectly. Unflinching in its depiction of the legendary Jackie Robinson’s journey from the Negro leagues to Major League Baseball, the stirring material is matched by some pitch-perfect performances.

END_OF_DOCUMENT_TOKEN_TO_BE_REPLACED 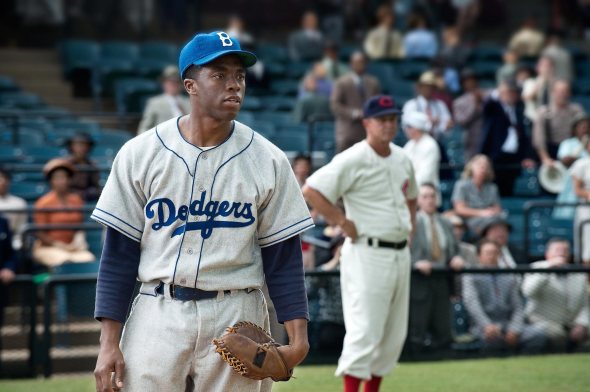 Although the sports underdog story has been told several hundred times already on the big screen, it’s one that audiences keep coming back to. Combine it’s tried-and-tested form with a historical grounding and you have 42 (2013), a biopic of Jackie Robinson who was the first black ballplayer in baseball history. Directed by Brian Helgeland, Warner Bros. have released a second trailer for the film this week, and already it has the air of inspiration. Chadwick Boseman is the actor who has been deemed fit to fill Robinson’s shoes, whilst veteran Harrison Ford will play pioneering Los Angeles Dodgers General Manager Branch Rickey, who signed Robinson to the minors before bringing him up to the pros.

Watch the trailer for 42 at CineVue here.