Video Review | How to Train Your Dragon 2

Here’s me nattering on camera about How to Train Your Dragon 2 for The Reel Deal.

Seth Rogen and Nicholas Stoller are responsible for some of the funniest comedies of the noughties, from 2007’s Superbad to The Five-Year Engagement (2012). Bad Neighbours (2014) marks the first time the Apatow alumni have teamed up, and on this evidence it’d be a shame if it was the last; frequently earning hearty audience laughs, both director and actor are at the top of their game in this impressive entry.

Rogen and Rose Byrne play Mac and Kelly, a young and married couple who are struggling to adjust to a quieter life with their new-born baby. Not helping matters is the arrival of the Delta Psi Beta fraternity led by Teddy (Zac Efron) and Pete (Dave Franco), who set up shop next door. In a desperate bid to avoid future squabbles, Mac and Kelly do their best to bond with their obnoxious new neighbours, even offering them a joint as a friendly welcome gift. As Delta Psi’s outrageous parties get louder and wilder however, war is declared and a myriad of pranks ensue.

END_OF_DOCUMENT_TOKEN_TO_BE_REPLACED

Back in 2010, Matthew Vaughn’s Kick-Ass left an indelible impression on audiences with an energetic, fresh take on the increasingly saturated superhero genre. Jeff Wadlow replaces Vaughn (a producer here) at the helm for Kick-Ass 2, and whilst the franchise no longer has the shock factor, the sequel still serves up a generous helping of foul-mouthed superhero fun. 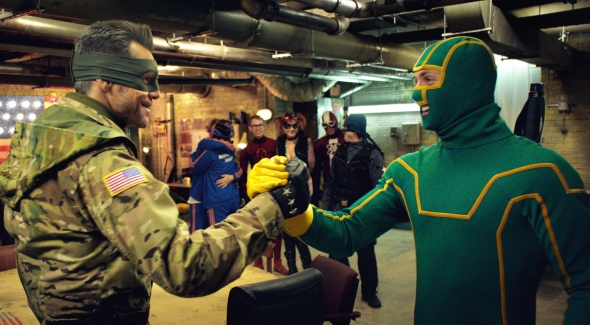 With Shane Black’s Iron Man 3, Zack Snyder’s Man of Steel and The Wolverine all scheduled for release in the coming months, the summer of 2013 is stacked with eagerly anticipated superhero movies for global audiences’ viewing pleasure. If the aforementioned blockbusters aren’t quite what you’re looking for, however, Jeff Wadlow’s Kick-Ass 2 (2013) – the sequel to Matthew Vaughn’s outrageously popular original, Kick-Ass (2010) – is set to offer an alternative to the spandex-clad genre with another helping of ultra-violent superhero satire. Today, Universal Pictures officially unveiled an official poster to go along with a US red band trailer, and you can check out all the foul-mouthed goodness at the bottom of this post.