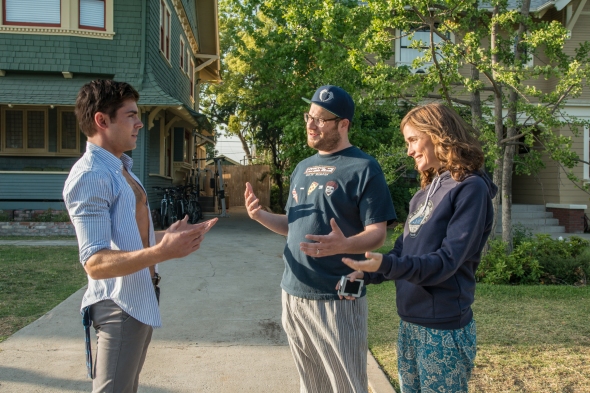 Seth Rogen and Nicholas Stoller are responsible for some of the funniest comedies of the noughties, from 2007’s Superbad to The Five-Year Engagement (2012). Bad Neighbours (2014) marks the first time the Apatow alumni have teamed up, and on this evidence it’d be a shame if it was the last; frequently earning hearty audience laughs, both director and actor are at the top of their game in this impressive entry.

Rogen and Rose Byrne play Mac and Kelly, a young and married couple who are struggling to adjust to a quieter life with their new-born baby. Not helping matters is the arrival of the Delta Psi Beta fraternity led by Teddy (Zac Efron) and Pete (Dave Franco), who set up shop next door. In a desperate bid to avoid future squabbles, Mac and Kelly do their best to bond with their obnoxious new neighbours, even offering them a joint as a friendly welcome gift. As Delta Psi’s outrageous parties get louder and wilder however, war is declared and a myriad of pranks ensue.