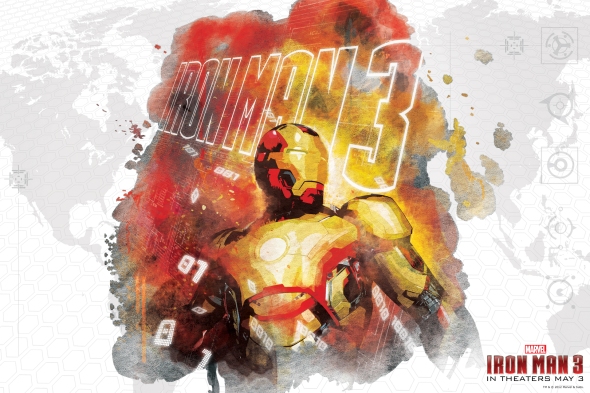 Much like Tony Stark, Marvel Studios have been tinkering with Iron Man for over five years now, striving to upgrade and improve upon the previous model. In some ways, the success rate of the franchise mirrors Stark’s own cinematic journey. The first Iron Man (2008) was an unexpected hit, delighting cinemagoers whilst sowing the seeds for Marvel’s ‘Phase One’. Iron Man 2 (2010) saw both protag and film succumb to expectation, whilst Avengers Assemble (2012) took the character’s popularity to new heights. Enter Shane Black’s Iron Man 3 (2013) – a fun, action-packed superhero yarn that’s arguably Marvel’s best solo instalment to date.

END_OF_DOCUMENT_TOKEN_TO_BE_REPLACED

Robert Downey Jr.’s much loved interpretation of Tony Stark aka Iron Man has won fans all over the world, and he will be back to reprise his role for a fourth time in the highly anticipated Iron Man 3 next year. Earlier this year, the lucky fans at comic-con got a first look at some new footage, and in the past few days we have been privy to stills and, in what has become the latest marketing tool for big films, teaser trailers of teaser trailers. Now, we have the first full trailer for the Iron Avenger’s next solo adventure. Directed this time around by Shane Black, Iron Man 3 will pit the hero against the Mandarin (Ben Kingsley). With his back against the wall, Stark must rely on his smarts to protect those he cares about.

Watch the trailer for Iron Man 3 at CineVue here.